Gallery
Home About the Artist Message Other Projects Blog Contact 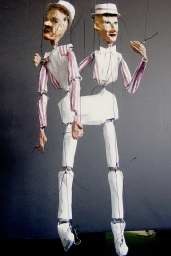 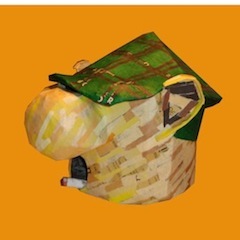 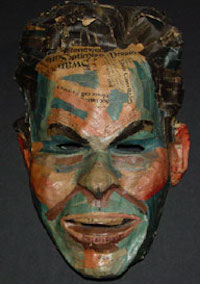 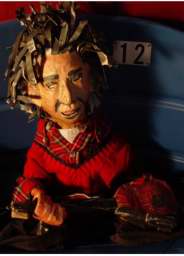 Literary ideas and provocative modern art have influenced the odd twists and turns in my biography. In 1980, while studying literature at the University of Delaware, I started making masks and marionettes out of paper mâché. Then as now, the inexpensiveness of the sculpting material, the ease of modeling and molding it, and the ubiquity of recyclable newspaper fired my enthusiasm for the medium. I considered the work of artists in local museums as a license to elaborate my own expressions.

That my pieces should have some utility was a concern of mine in those days. I made masks and puppets that were recognizable persons or characters so they could be used theatrically. I built games and props that were used on a children’s television show. Merchants displayed my work in their shop windows. Eventually, I wasn't satisfied with making utilitarian objects; I vowed to make myself useful, too, so I entered Temple University and worked on the requisites of a high school English teacher.

Acquiring credentials and teaching English in the Philadelphia School District consumed me from 1991 to 2004. I continued to make art privately, including collage portraits, but my greatest investment in paper mâché was teaching students how to use it to create objects suggested by the books we were reading. Advancing the literacy of Philadelphia’s public school children was the best job I could imagine, so I was very unhappy when, after nine years, the behavioral climate of my school took a sudden downward turn, and I had to stop teaching for safety's sake.

In my changed circumstances, I began again to produce collages using a palette of found, colored newsprint. In the last century, masters of paint and brush liberated artistic expression from depiction and narrative entirely, so that the characteristics of the material and the artist’s technique were themselves the subject of the work, but paper mâché is less ethereal than paint and the opacity of paper strips limits forays into abstraction. As a medium for sculpture, paper pulp affords fewer opportunities for technical exploration than clay.

Where other artists could make light and air the focus of their work, the hidebound aspect of paper mâché challenged me to explore what the material could be, not what it could do. Fashioning a likeness of a person using nothing but scraps of newspaper thrilled me. Soon, I had made colorful images of nearly every one I knew without loading pigment of cobalt or sienna onto a single bristle.

As I stood next to two of my pieces in MLAC’s 2009 Betsy Meyer Memorial Exhibition, another artist suggested I apply for membership at Muse Gallery. Maybe I shared with her what was in my artist's statement: “I have been making relief sculptures that zero in on the landscape of faces, piling up with cardboard, paper, and glue the highs of a likeness, its cheek bones, nose, and chin, and carving into the fleshy surface its careworn lows, the creases and furrows.” The corporeality of paper pulp poorly imitated fog or twilight, but I could express three dimensions with it.

At Muse Gallery I finally enjoyed the comfort and company of other artists who struggled as I did to fix unwieldy matter inside a rigid frame. Twenty or so very creative people attended our contentious monthly meetings, and after a while, they named me the gallery director, an honor that is often likened to becoming a herder of cats. The acceptance of those wonderful artists validated my experience and freed me, in a way, to explore other subjects besides the human face with my layers of cardboard, paste, and paper.

In the decade since I first joined Muse Gallery, my understanding of the whys and wherefores of my own creative process has continued to develop. I produce several large-scale and intimate works each year as well as the occasional video using marionettes. I have assisted other artists in identifying and articulating the moving forces behind their own efforts in painting and sculpture and helped a few to publish their statements on the Internet. The concrete description of amorphous processes will always fascinate me, and many of my ideas about art and cultural matters have made it onto my own site, which you have been kind enough to explore. My life as an artist is anything but materially secure, and I supplement my needs by hectoring adult enrichment classes in art history and tutoring the literary and academic skills of young people.